He's never been convicted of an actual crime: Why has Turkish philanthropist and civil society activist Osman Kavala been in prison for 1,144 days? A court has now extended his imprisonment.

After spending 1,144 days in prison, the 63-year-old entrepreneur and human rights activist Osman Kavala, who has never been convicted of a crime, is now standing trial as part of the third lawsuit filed against him, on charges of "attempting to overthrow the constitutional order of Republic of Turkey" and "securing for purposes of political or military espionage information that should be kept confidential for reasons relating to the security and interests of the state."

The first hearing of the trial was held at an Istanbul court on Friday. Kavala attended the hearing via video link. He stated that the accusations in the indictment were not based on factual evidence and that they are contrary to his world view, ethical values and the aims of the NGOs he is responsible for. "My ongoing imprisonment, based on these strange accusations so remote from the truth, has become a kind of mental cruelty. I hope this will be the last indictment of its kind," he said.

The court ruled for the continuation of Kavala's imprisonment. The prosecutor requested the witnesses to be ready for the next hearing, which will be held on February, 5, 2021.

Who is Osman Kavala?

Kavala is one of the most prominent civil society figures in Turkey. The businessman has contributed to the establishment of several publishing companies in Turkey since the early 1980s, going on to support numerous civil society organizations a decade later.

In 2002, he founded Anadolu Kultur, a nonprofit organization in Istanbul supporting cultural and social projects. The organization's objectives included enabling the production and promotion of arts and culture in Turkey, supporting local initiatives, emphasizing cultural diversity and rights and strengthening local and international collaborations.

He was also a founding member of philanthropist George Soros' Open Society Foundation in Turkey.

Kavala was previously accused of orchestrating and financing the Gezi Park protests in Istanbul in 2013.

He was taken into custody on October 18, 2017, following a meeting with the German Goethe Institute concerning a joint project with Anadolu Kultur.

He was acquitted in February, but a fresh arrest warrant was issued against him only hours later, this time for a separate case accusing him of being involved in the June 15, 2016, coup attempt. 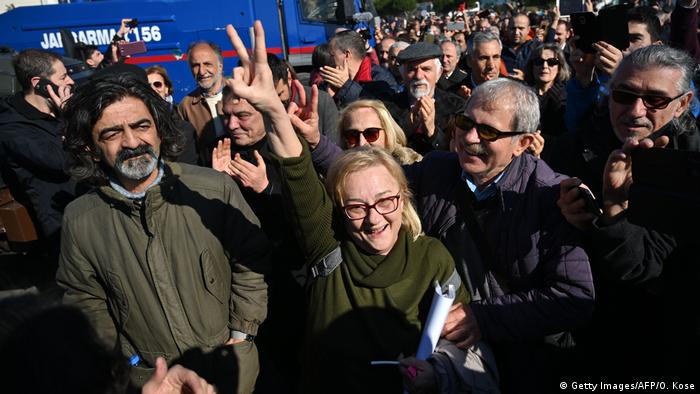 Supporters celebrated after Osman Kavala's acquittal on February 18, 2020, but he was arrested again a few hours later

Nearly one month later, he was once again freed from this accusation but was kept in remand detention on the charge of "political or military espionage."

Kavala was kept in prison despite an the European Court of Human Rights (ECHR) decision stating that he should be released immediately. On December 10, 2019, the ECHR had ruled that the European Convention on Human Rights had been violated and ordered Kavala to be released immediately. The ECHR concluded that Kavala's arrest was based on political motives, without any reasonable evidence backing the accusations. However, Turkish officials did not implement the decision and said the ECHR's judgment was not final.

In May 2020, the European Court of Human Rights rejected Turkey's request for the chamber judgment in Osman Kavala's application to be referred to the Grand Chamber, finalizing its December 10, 2019, judgement.

In September 2020, the Istanbul Chief Public Prosecutor's Office prepared a new indictment, accusing Kavala of collaborating with Henri Barkey, a prominent Turkey scholar in the United States, and "having taken a role in the coup attempt." Kaval faces a sentence of life in prison.

Kavala visited by his wife, Ayse Bugra, in prison

No legal basis for detention

Professor Koksal Bayraktar, one of Kavala's attorneys, noted that the indictment was no more than presumptive fiction and was not based on any concrete evidence: "Overthrowing the constitutional order and obtaining confidential information of the state for espionage are very serious accusations. To file a lawsuit on those crimes, concrete evidence and events are needed. However, there is no legal basis or determination in the indictment regarding the charges," he said.

The indictment accuses Barkey of links to the network of US-based Islamic preacher Fethullah Gülen, who is accused by the Turkish government of orchestrating the July 15, 2016, coup attempt. In addition to that it attempts to tie the Gezi Park protests to the July 2016 coup attempt and to Kavala and Henri Barkey. Still, there is no evidence supporting these claims.

'The charges are political'

Koksal Bayraktar says the Gezi Park protests were mentioned in over half of the new indictments, yet he points out that Kavala was acquitted of all charges in the Gezi trial.

Human rights organizations across the world have strongly criticized Kavala's arrest and said the charges are political.

"Kavala has been detained for 38 months. We are faced with a situation that is against human rights," Bayraktar added.